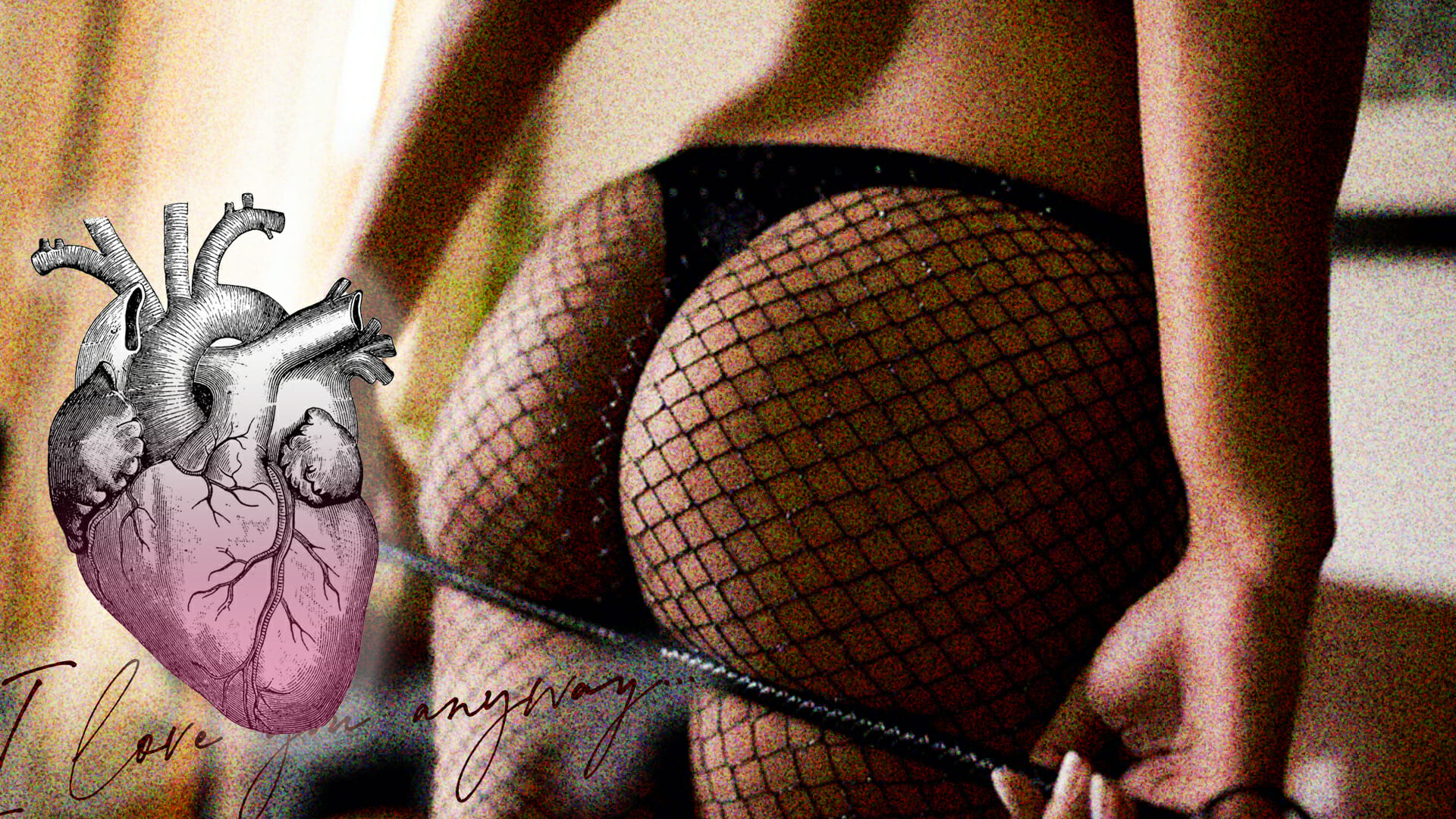 The things they should warn you about the first morning-after.

Total bare skin (if you’re not).

Becoming distinctly aware of how bloated and gassy you are in the mornings.

The sudden urge to head to the bathroom for Number 2.

Really wanting water/coffee/aspirin without wanting to wake them up.

Putting back on dirty underwear.

Walking home feeling like you have a blinking neon-sign above your head “I HAD SEX!”

(Alright, I’ll admit the last one is a nice perk, one night stand or otherwise…)

So last I left you, gentle reader, was a sober Rin in a stranger’s bed the morning after, next to a lightly-snoring David Bowie lookalike. As I stole glances at him and tried really hard to quell the impending stomach growls, all I can remember is how beautiful the morning light was as it streamed through his gauze curtains. I felt like I was in a dream, “Did you really just impulsively slept with a guy from the bar?”

Panic rushed through my veins. Uhoh, it’s sober Rin not drunk Rin at the helm… quick, think of something witty to say!

He smiled and my million-thoughts-racing-about-how-awkward-this-moment-is disappeared. I was a goner again. Let’s just say the ONS became a ON(And The Next Morning)S.

When I eventually left his place and practically skipped back to mine, the sun was brighter, the sky seemed bluer, and the birds were chirpier. What a difference 24 hours made, was all I could muse about with a smile across my face on my way back. I met a cute boy, he liked me, I liked him, we had sex. And now there’s the promise of tomorrow and more!

I wish I could give her a hug back then. And perhaps the eventual body count list to let her know she won’t be doing too badly herself.

Did I see David Bowie again?

The short answer is yes, and he would be FWB Zero.

The more nuanced, retrospective narrative is: he was an important turning point in my life who helped shatter my perceptions of love and fucks.

Before David Bowie entered the scene, I had an uncompromising view of what love and intimacy was. You can only have sex with someone you love, and love is always for the long haul in the form of a ‘real’ relationship. I had waited three months before sleeping with my first boyfriend (and hesitantly too as I was saving myself for marriage). As one can imagine, I was devastated when we broke up and he had a new girlfriend the following month. So what did I do?

If being a Charlotte who played by the rules didn’t work, fuckit then I’ll be a bad bitch just like Samantha. I’m going to act like a man and just have sex for the sake of having sex. No catching feelings, only breaking hearts. But I’ll be lying if I didn’t admit I was still secretly hoping that I’ll land my Happily-Ever-After by being the fun and cool chick.

Then after I met David Bowie that magical evening, I was brought abruptly back to reality again. After attempting to reignite that same je ne sais quoi the week after with flirty text messages, it became crystal-clear he didn’t want to pursue any further – unless of course it was just another no-strings-attached rendezvous. I took a deep breath, gingerly placed my heart into a tiny box, then turned around and said “Fine, it’s a deal…”

And oh what a summer of carnal fun that was! But also a crash course in breaking stereotypes and unlearning the pain from my first heartbreak.

Remember how I shared the importance of aftercare in another essay as the first time I had sex, my ex pulled off the bedsheets and ran to scrub the bloodstains off literally 5 minutes after we were done? Well, it didn’t register how traumatized I still was from witnessing that. Until I spent another night at David Bowie’s and woke up to see the tell-tale red patch beneath me on his white sheets.

“Huh, what? What happened? Are you ok?”, he shot straight up with worry in his groggy voice.

“I’m so sorry! I’m so so sorry… my period came and I bled on your white sheets. Please get up so I can wash it now.. I’m so sorry, I’ll get you new ones if the blood doesn’t come off…” There was no way I could hold my tears back as they rolled down with sheer guilt and panic embedded in my voice.

David Bowie sat still with a strange look in his eyes. I realize now it was a mixture of confusion and compassion. But back then, I thought it was contempt and I held my breath. Ready to be yelled at just like my ex did.

He laughed and pulled me into his arms, “Oh babe, it’s just blood! It’s ok, come here you…” His warmth engulfed me and it was my turn to be confused. I mumbled while resting my head in the crook of his neck, “Wait, you’re not mad at me?”

He pulled away and looked me in the eyes again with bewilderment, “It’s just blood. Why would I be mad at you?” Then a more familiar twinkle appeared, “Well since we’re going to wash the sheets anyway….” David Bowie smirked as he wrapped his legs around my torso. My turn to laugh and kiss him back.

Oh wow, this was unexpected.

My heart opened the lid slightly and peeked through the tiny box that day. But I knew I should still keep it inside to be safe.

David Bowie and I had our fun until I met my next ‘real’ boyfriend. But he still stayed around in my life for the next few years as a flirty friend who pops up once in a while to reminisce. The funny thing was, after that boyfriend and I broke up 8 years later, David Bowie was there again for me.

This time it was in a tiny cafe in Bangkok as I whined about how hard it was to date online and how I wasted my best years on He Who Should Not Be Named. David Bowie had packed his bags from New York three years prior to be with his long-term girlfriend and invited me over to heal from my breakup.

As I saw that familiar twinkle in his eyes and Cheshire grin, I remembered the hot sweaty summer we had and for a brief moment, my mind wondered what an alternative timeline with him would have looked like.

Instead, he suddenly got serious.

“You know Rin, you deserved more. I hated that guy, he was such an asshole. But you seemed happy so I didn’t say anything. And I’m sorry too that I didn’t treat you better back then. You did nothing but loved me and I didn’t do more.”

I dropped my fork, oh shit. I thought I hid it well from him all those years. I looked back at him, “Well, I was young. I just wanted the best for you and look at you now, I’m so proud of you. You’ve kept me grounded too all this time…”

And just like that, I was back in the game. Fishing line and hook ready in hand.

The things they should warn you about the situation-after.

How there will be really amazing lovers (if you’re lucky).

How there will be total duds that would be a waste of good lingerie (if you’re not).

The friendship that can ensue once you share bodily fluids.

The kindness and empathy that can be as deep as a ‘real’ relationship.

How often you’ll have a flutter down there when you have a hot sex flashback.

Tattooing an inside joke because you want to remember how good it can be.

That you might forget their names but not how wonderful/terrible their apartments were.

And that there’s absolutely nothing inherently bad or good about having friends with benefits. Just only the stories and lessons you tell yourself about them.

(And the actual benefits of dopamine-inducing sex of course.)

And now time for the shameless plug, I’m running the updated Friends With Benefits workshop in person at Horny.sg! Tickets are almost sold out so I hope I’ll get to see you!

This session is open to all genders

Amidst the perils of dating and relationships, sometimes all you really want is just good old fashion frisky fun. Ever wondered how to have casual sex and still be safe and not catch feelings? Join me for all you need to know to keep it casual, safe and fun (and yes how to find one…)

Some of the topics covered:

• The difference between ONS, fuck buddies and FWB

• How to keep feelings and sex separate

• How to stay safe and protect yourself

• NEW: Where and how to find one (and what not to say)

Whether you’re trying to find out if casual sex is right for you or already have some experience, you’ll get the essentials to be confident in your hook-ups and get your questions answered in this intimate and informal session. All participants will receive a Sexy Fun Kit goodie bag worth $37! What’s a Sexy Fun Kit? Why everything you would need for a ‘sleepover’ of course (which I wish I had that first night!)

Have questions about the workshop? Drop me an email and I’ll be happy to answer them!