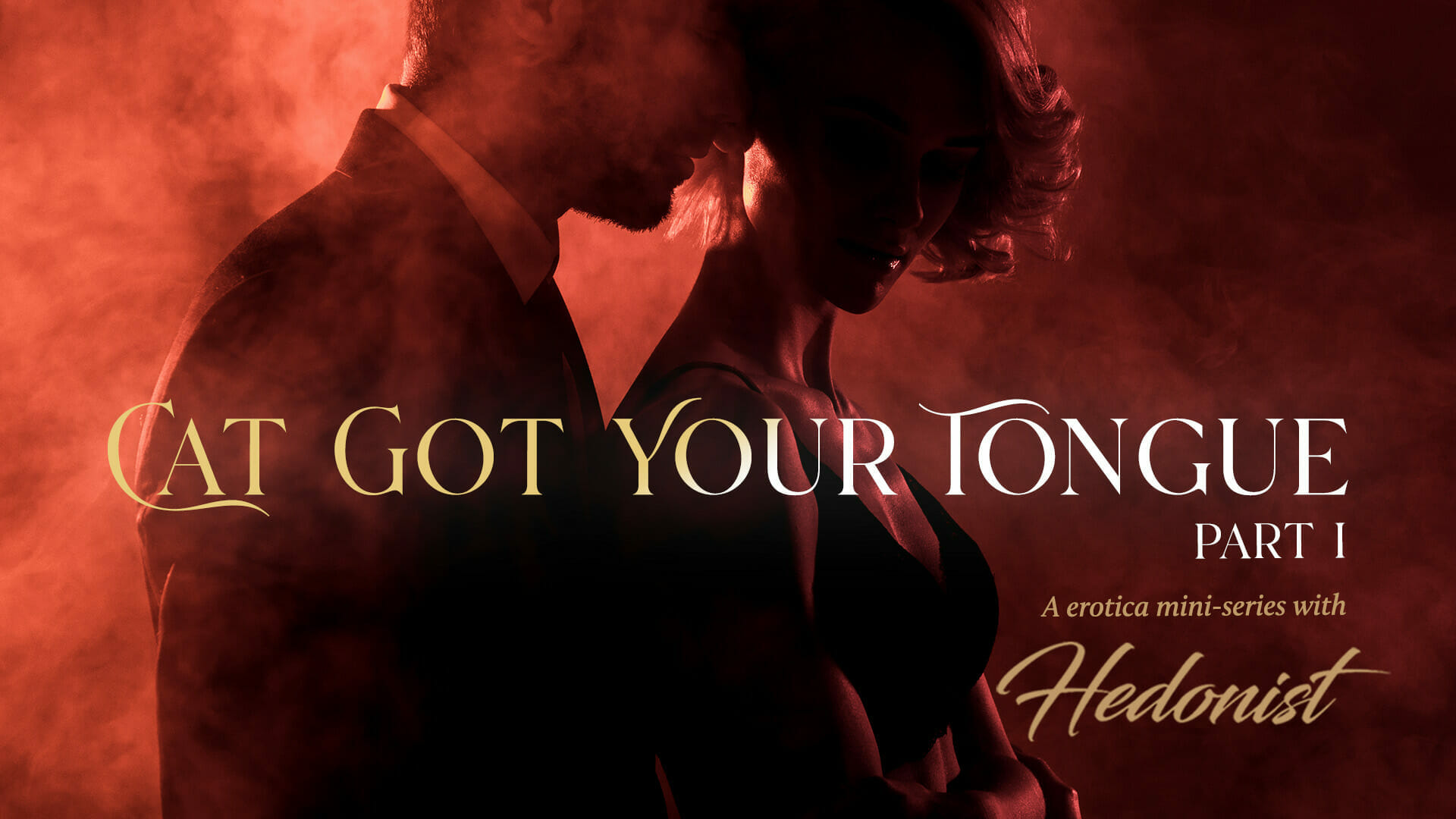 In collaboration with our sexy friends over at the Hedonist, we’re pleased to bring you a special Erotica mini-series where YOU get to pick what happens next. Just like a Choose-Your-Own-(Sensual)-Adventure, follow their IG: @hedonisttribe to find out the next erotica series. Join Selena and Nicolas as they banter their way to the bedroom…

“Mr Air France again?” Lynn sighed behind my back on the bed as I put on the last stroke of mascara in the mirror.

“You know, just because it looks like I’m half-blind doesn’t mean I can’t see you rolling your eyes behind me…” I absent-mindedly muttered as I capped the mascara wand back on.

“Relax Selena, I’m just making fun of you! You usually get bored of them by the 4th date so you have to admit it’s pretty unusual that you’re still interested. Plus I’m still pissed at getting ditched at Halloween by my bestie… even if it was for the Best. Head. Ever.” She cackled as she took one of my throw pillows and aimed it at my head. I laughed and narrowly ducked in time as I saw it whizzing towards me through the reflection.

“Hey! Watch the hair! Well technically it’s only the 3rd date so there’s still enough time to get bored….” I paused for a moment.

She gave me a knowing look and continued the rest of my sentence. “– but?”

“I don’t know Lynn, I really like him. He’s cute, smart, funny, amazing in bed…”

“Oh no no, I’ve seen this before babe. Don’t do this to yourself! Don’t jinx it!”

Lynn sunk back in my bed and exaggeratedly sighed, “There it is, ladies and gentleman. Little Miss Pessimist is in the house.”

It was my turn to throw a pillow at her head. “Yeah, yeah, yeah… well you know the drill. All the boys want me when it’s fun and games, then when it’s time to get serious, It’s like “Poof…” they disappear.” With my make-up and hair done, I stood up from my dressing table and strolled over to my wardrobe to figure out my outfit.

I knew Lynn had a point when it came to my Debbie Downer attitude towards love but for the longest time, it did seem like I was just a magnet for bad boys who didn’t want to grow up and were really just looking for a mummy. But I’m tired of dating a man-child, I wanted a partner-in-crime. And Nicolas was the closest to one I’ve encountered for a while. While we did meet in the raunchiest of ways during the crazy Halloween bash last month, he has been nothing but respectful, kind and just – nice. What a weird concept it seems in this day and age. A guy who’s just nice. Yet whom I’ll still surrender to and let him have his way with me however and whenever he wants. That’s the scary part. I’m really starting to see myself with Nicolas.

Lynn was quiet as she watched me pull out my burgundy halter body-con dress and black patent stilettos. We knew each other like sisters and as I stayed silent and eyed my handbag shelf, she came over and reached out for a gold metal-mesh clutch and handed it to me. “This one, it matches your nails. And babe, you know I love you and I want the best for you. I’ve a good feeling about him so don’t worry, just have fun for now ok?”

Max’s was the new hotspot in town and as I stood at the entrance in line, I peeped in and could see why. It was dim yet bright enough to see the beautiful art-deco interior with the accompanying lo-fi lounge music. The food was suppose to be good with a legitimate Italian chef and well, the fact that it’s just 10 minutes away from Nicolas’s place also helped. He’d texted me earlier that he was done with work early but I should just take my time. As the hostess asked for my reservations, I uttered “It’s under Laurent. Nicolas Laurent.”

She didn’t have to bother walking me to our seats. I’ve already spotted that unmistakable dirty blonde-hair, chiseled jawline and deep green eyes lost in his phone screen in a corner booth at the back of the bar. And it seems so did every other hot-blooded woman in the room as they were giving him the eye. While part of me was a little jealous, I secretly took pride in the fact that he was mine for the night as I sauntered over. This ridiculously attractive specimen was clueless at the flirtatious looks directed at him and I wanted to keep it that way.

“Is this seat taken?” I cooed as I sidled up next to him in the booth. I caught him by surprise as he jolted in his seat and looked up from his phone screen. His bewildered expression relaxed to a huge grin and his dimples appeared. Ooof, those emerald eyes and dangerous dimples, I thought as I couldn’t help myself from gazing at his lips.

“Oh I’m sorry Miss, you can’t sit here. You see, I’m waiting for a very special girl and she will not be happy if she sees you.” he protested in his deep and masculine voice. His twinkling eyes betrayed the mock-seriousness in his tone.

“Really? Now who is this lucky girl?” I grinned back in a quizzing tone.

“Someone very special. You’ll like her. She’s beautiful, sweet, funny, crazy in bed….” Nicolas motions me to come closer as he leaned in to whisper in my ear. His woody cologne hypnotized me as always as its scent wafted through the air and I felt my temperature rise up and my cheeks turning red. I couldn’t help but to imagine all the naughty things we will get up to later tonight. I bit my lips as I felt the warmth of his breath on my neck as he confessed – “But she is always late.”

I recoiled and slapped him on his thigh, “You dumbass! You told me to take my time!” as we both burst into peals of laughter. He gave me a quick peck on my cheek as I pouted, “I know I know, I landed early today. But you are always late so don’t even try to deny it…”

And with that affectionate display, I could tell that my territorial stake had been claimed as the other women in the room turned their heads away. I looked up at Nicolas’s sheepish grin and kissed him back on the lips, “Fine, I’ll let this go because it’s true. But I’ll get you back, you dumbass.” I leaned into his chest as he wrapped his arm around me, “So what’s good here and how was your flight?”

So it turns out that Mr Air France, was indeed an actual Air France pilot. As we got to know each other on our previous dates, it turns out that he was also dragged by his friends to the party the night we met but didn’t have time to source for an actual costume. So he just decided to show up straight from the airport. I was a lucky girl indeed.

As we sipped our strong cocktails and shared a delicious fire-oven pizza, I couldn’t help but beam at this incredible guy in front of me. As we caught up on each other’s week and flirted, how sexy and nonchalant Nicolas looked caused a familiar stirring in my loins. This boy has no idea of the effect that his unbuttoned shirt and rolled-up sleeves had as I fantasized about how those muscular forearms held me down the last time his tongue had his way with me. Mmmm… now that was a nice memory, as I started to feel myself getting slick.

“A penny for your thoughts?” He broke my trance with a knowing look.

It was my turn to be startled as I turned bashful, “Oh nothing, my lips are sealed…”

He threw his head back and laughed “Oh Selena, your lips are never sealed!”

“Hey! That’s strike 2!” as I playfully slapped him again. My friends have always joked that once I start talking, I never stop but I’ve never once felt offended about the jest. But it was strangely embarrassing when Nicolas took a jab at me, probably because I’ve always been trying to play it cool with him. I’m definitely going to make him pay for this as a devious plan formed in my head.

He lowered his gaze and smirked, “And that goes for both pairs of lips too.”

I smiled demurely at him as I took my napkin and dropped it under the table booth. “Opps, clumsy me…” 
“Oh let me get it– ” I cut him off in mid-sentence as I placed my left hand on his thigh to steady myself and leaned over his lap. “I’ll get it babe..” My breasts deliberately grazed his groin as I pretended to search for the napkin on the floor when they were clearly right at his feet. Ahah – it worked as I felt his legs tensed up and was that a distinct twitch I saw under his pants?

P.S. If that’s gotten you into the mood, take 10% off any online purchases over at Hedonist. You’re welcome….