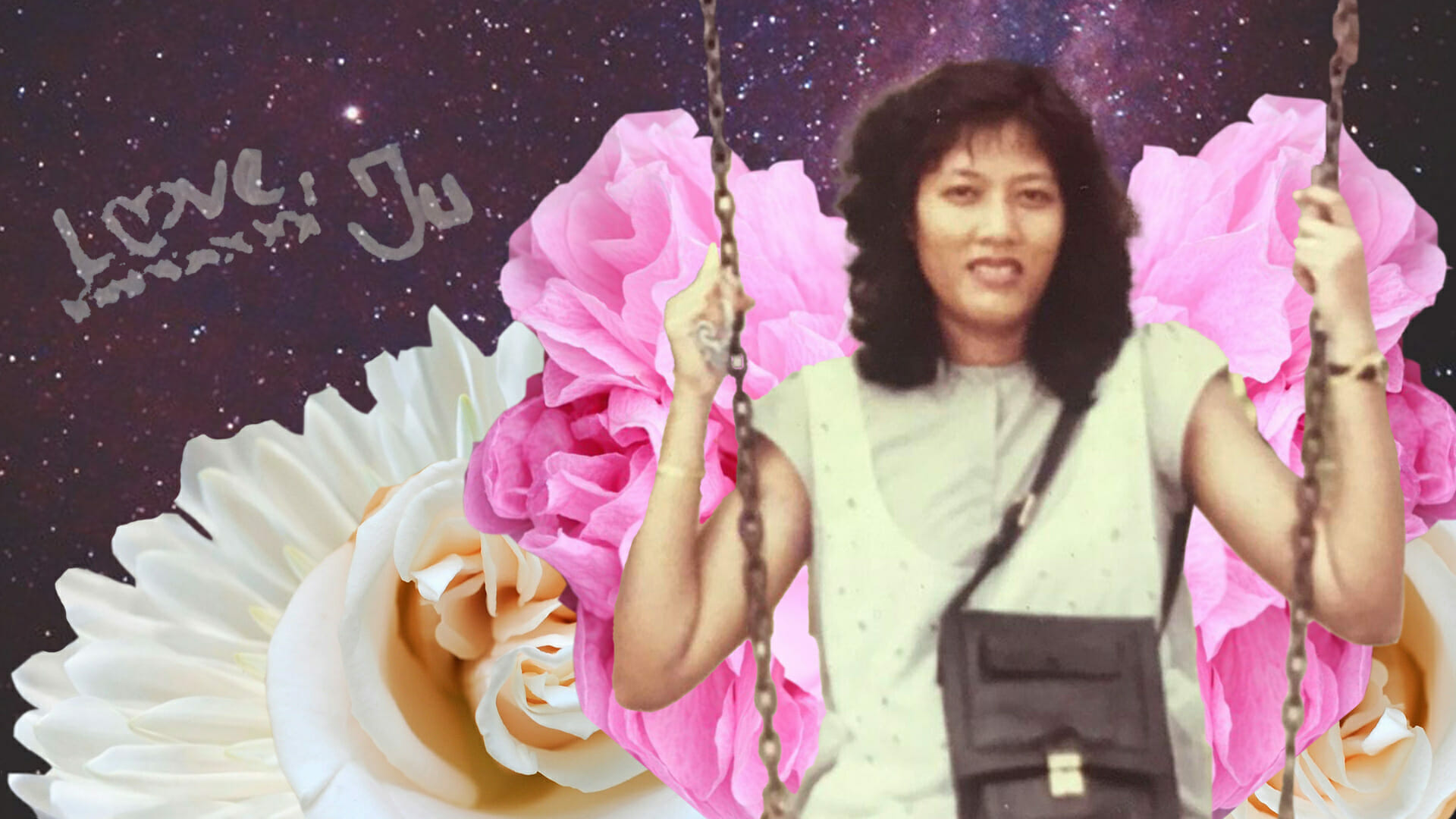 Shy & Curious sprung from my mum’s and my shared love for dirty jokes.

One of my favourite memories of my mum was witnessing her painfully easy set-up to a penis joke. It was our first visit to the hospital since she was admitted the evening before and as we gathered around her bed, my dad asked if there’s anything he could get her to eat.

At that split second, she turned to look at me straight in the eyes and I caught that mischievous twinkle. I knew exactly what she was about to say next.

She turns to my dad and without batting an eye:
“Tak, nak yang sunat…”
(“No, I want them circumcised.”)

Insert pause, “Of course I want them cut, I’m literally in a hospital bed.. am I suppose to peel and slice my own mangoes??”

Granted that the joke’s much funnier in Malay since 1) the term ‘buah’ for fruit is also used as a euphemism for dick and 2) ‘potong’ is a crude way of saying circumcised. But my sister and I laughed so hard that tears streamed down our faces and the other startled patients gave us the stink eye. Our mum paused her rant at my dad and turned her attention to us “Ni dah gila ke apa?” (“Have you girls gone mad?”)

That was the last time our mum was her sarcastic, sharp, gutter-minded, witty self. She passed away 2 days later.

My mother and I had an unusual relationship. My dad and her had been divorced for close to ten years. In that time as the eldest daughter, we bonded over dirty jokes and commiserated about the men in our lives.  However she would swing between two moods and it depends on which one I caught her in.

If I was lucky, she was my BFF and we could riff off each other’s sex puns for the whole day. She’ll be curious about the cultural dating differences since I’d a thing for French guys. I’ll go to her each time someone broke my heart.

Until of course, she suddenly remembers she’s my Asian Muslim Mother® and starts going into a tirade of how dare I speak of such taboo topics. I’ve forgotten the number of times I’ve been ‘disowned’ for a disrespectful misdemeanor according to the Book of Mummy.

Even though it was a consequence of her formative years in a patriarchal household, it still felt like talking to a ticking time bomb. As liberal as she was, she couldn’t shake off the weight of shame and guilt from her ancestors when it came to sexuality and our bodies.

Despite knowing all of this, I was still just so angry that she hid her breast cancer from us.

By the time she was admitted to the hospital, the tumor in her left breast had grown so big that it ate up all her breast tissue, broke through the skin and ruptured. No one had any idea because she hid her body beneath baggy t-shirts. She was also physically and mentally crazy strong, and so never revealed that she was in any pain until towards the end.

My beautiful mother passed away because she was afraid to ask someone if this was normal. She didn’t feel like she could tell her family or friends because she didn’t want to be a burden. She felt that her body was betraying her and she would be less of a woman because there was something wrong with her breasts.

I was angry that she could joke about sex positions; but not tell me about the lump in her left breast.

I was angry that she would advise me about love; but not confide that she’s too scared to see a doctor.

I was angry that she would chastise the cleavage I showed; but not admit that the lump in her left breast has gotten bigger and spread to her right.

But at the root of it, I was really just mad at myself that I didn’t catch on or do more.  I didn’t make her feel safe sharing about her body as easily as we shared and joked about sex and boys. No one told her it’s ok to talk about these things without shame or guilt because it is perfectly normal to be curious. There wasn’t a resource that she could go to where she would feel comfortable enough to find out more without fear or judgment.

So that’s why Shy & Curious was formed.

In honor of my mother Juraidah Rahmat’s legacy and our unorthodox penchant for oversharing, I wanted to create a safe space where there’s no such thing as a stupid question when it comes to sex, love and our bodies.

Shy & Curious is a place where you can explore and discover all the questions you have about sexual wellness, relationships and our bodies without having to hide your Google searches.

I’ve always been fascinated by sex since my teens and in light of her passing, self-love and knowing our bodies have become pertinent topics to explore as well.

Sex at its core is about vulnerability and intimacy. You’re literally naked with another human being with the assumption that you’re both here to have a fun time.

Sure, it can be about love. Sometimes it’s about power. But what’s the key factor holding up this assumption? Trust.

Sexual intimacy may have schooled me on relationships, but it taught me a lot more about myself, my body and how I take care (or don’t) of myself.

While I don’t claim to be a certified expert (yet), I aim to uncover and normalize issues that you may be curious about but too embarrassed to ask your girlfriends and too afraid of what you might end up with without Safe Search on.

Have a question you’ve been secretly wanting to know? It could be something as straightforward as Sex Toys 101 or more nuanced like ‘how to sext without your pictures appearing all over the internet’. We also aim to dive into wellness and health so that you’ll never feel alone when it comes to figuring out what’s going on with your body right now.

Who is Shy & Curious for? If you have an inkling that it’s for those who may be more private or new to this realm – bingo! We’ll take care of the research and tricky questions so we can share honest stories and insightful articles with you. However what’s most important is as long as you’re here with an open mind to learn and un-learn what you’ve been taught about sex education, love and self-care, we’re happy to have you!

Unsurprisingly, this site is also my way of continuing my inside jokes with my late mum. Somehow I feel she’s still up there giving me the knowing look and going “So… still a fan of ‘baguettes’ eh?”

Love, Rin: And Just Like That...
Love, Rin: My Boudoir Shoot with The Pin-Up Rebels
#NewSexSlang with IPPF: A Recap
Share
Tags: About Us, Featured, Me, mind and body, Shy & Curious, stories, XOXO